Mixing at Low and High Volumes

If you are an audio engineer, or aspiring audio engineer, you’ve probably heard that it’s best to mix at low volumes. This is because according to the Fletcher-Munson curve, our sensitivity to volume changes at different frequencies. Generally speaking we can hear speech frequencies (2-5khz) over low or very high frequencies at the same dB, and the louder the mix gets, the less of a subjective difference there is between these ranges. 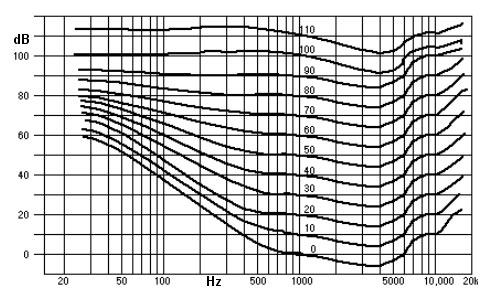 Figure A: Here is the Fletchur-Munson curve. If you look at 50 DB , for example, the volume needs to be much higher than 50db in the lower and high frequencies in order to match the perceived same volume at around 1khz.

When mixing at a low volume, you are eliminating the “allusion” that the frequency spectrum is balanced which is what we perceive when the volume is loud (notice the compression or flattening out when you get to high dB’s on Figure A). For example you may think that the kick drum sounds tight and punchy next to the bass when the volume is loud, but when you turn the volume down you realize that kick hasn’ been processed enough and becomes lost in the mix. So making judgments about arrangement, EQ, and compression are much better to make at low volumes. So if mixing at low volumes seems to reveal more accurate results, why is this article called mixing and low and high volumes! Well there is one thing that is difficult to hear at low volumes: sibilance. If you aren’t familiar with sibilance , basically sibilance is the result of exaggerated “s” or “ch” or “sh” sounds from a vocalist, which causes the frequency response to peak anywhere from 4-10Khz (sometimes higher). A highly sibilant vocal may look something like this on an Frequency analyzer : 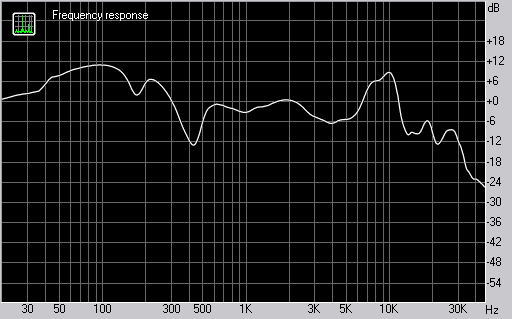 Figure B : A noticeable sibilant spike around 8-10Khz.

Hearing these sounds throughout a song sounds very harsh and fatiguing to the ears after time, so at all times must be controlled or tamed in some way. However at a low volume, not many things sound fatiguing or harsh to our ears. You can listen to a 5 Khz tone for hours at a low volume, but on a loud system will drive you nuts after seconds. So when listening for harshness, turn up those speakers, and start de-essing, and eqing away!

During any given session, there is a good chance you will experience times where the artist gets really quiet, and parts when they get really loud. While dynamics are good to have in a song, having too much can hinder the mix and result in parts getting lost, or parts being too loud. Often times when this situation arises,  new engineers slap a compressor on the channel to tame some of the peaks and bring up some of the quiet parts. However, more times than not, this can do more harm than good because it doesn’t work for all the parts on the channel.  I’m going to show you a way to fix this problem without relaying solely on compression to do it for you.

When recording vocals, it’s common for the vocalist to move around , whisper, sing, rap, yell, all within the same take. If you are constantly getting overly dynamic recordings from quiet to loud to clipping, first take the time address it at the source. Start by giving your client a heads up to try and stay within a certain distance from the microphone for the best quality. If you mention that it will have a better result, chances are they will have no problem trying to keep their distance in check. Now, of course they still will move around, and things will still sound overly dynamic, but if it’s even 10% better than before, it helps.

Secondly, check the settings on your preamp. Most preamps have a built in compressor in them. “But wait, I thought you said taming without compression!”. Well compression on the front end before being converted into your DAW, not only becomes part of the recording chain before mixing, but can avoid clipping, and work wonders when it comes time to mix the song. Use compression at the source, not when it’s too late.

Here at Studio 11, we have 2 main preamps that we use for vocals. The Manley Vox Box, and the Drawmer 1969 Mercenary Edition tube-preamp. Both have compressors built into them, and as a result become an integral part of the front end chain. If your preamp doesn’t have a compressor on it, look into putting one in your chain (but be careful to get one without too much coloration or you can do more harm than good). However if you do have a compressor, a gentle ratio, a fast attack with a few dB of gain reduction can work wonders. The fast attack will grab those loud transients to avoid clipping, tame some of the mid sized transients, and boost up of the quiet parts. If all is done correctly, you will end up with a hotter signal for your A/D converter (hotter the better for conversion), and a more solid, thicker looking waveform. But there will still be parts that are too quiet. As I mentioned before, the easy (and lazy fix) is to slap a compressor on there to bring out some of those softer parts. The problem with doing this is that it may work for some of the sound,  but when there are very loud parts, its going to sound very audibly compressed and lifeless (which you don’t want).  It’s a good rule of thumb to try to always use compression as a tool, not an effect. In most cases compression should be mostly translucent and shouldn’t take you away from the performance of the vocals. Of course there are some cases where over compressing can be used as an effect (think “All In” setting on the Universal Audio 1176), but most cases subtlety is best.

So instead of jumping right to the compressor, bring out that simple Gain plug in that you forgot existed the Audiosuite in Pro Tools. (or if your in Ableton Live, break the clip, and adjust volume of the section manually). Go through the track , using your ears and looking at the size of the waveforms, bring up those quieter parts so that they are on the same level as the rest. Now of course I’m not saying that the entire vocal track should be equally as loud, because that would be boring and dynamicless, but put them on a similar volume plane so they are always audible.  Keep in mind there will be parts that are supposed to be quieter ( think intros, bridges, outros ), but the parts that are in the middle of phrases , i.e words that were sung quietly when they moved their head from the mic, or maybe a word that was much louder than the other parts, can be gained up or down accordingly.

If you prefer using a smoother analogous volume adjustment (instead of gaining sections), reach for that volume automation. Riding the volume to level out quiet parts can lead to a very rewarding result in the end, and will certainly be better than slapping a compressor to “fix” those spots. Once you fixed everything and everything is leveled out and audible, then you can put a compressor  with a gentle ratio to glue it even further (if you even need to), or to bring out quiet transients that you couldn’t access via that gain tool or automation. Following these steps will help your vocals feel more present in the mix, and will avoid that dreadful “overcompressed” sound that you hear so often. Just try it out, play around with the front end compression, gain, and volume automation and you’ll be well on your way to taming those vocals , without sucking the life out of them.

For more information about our services, send an email to Studio11Chicago@gmail.com, or contact us directly at 312 372 4460